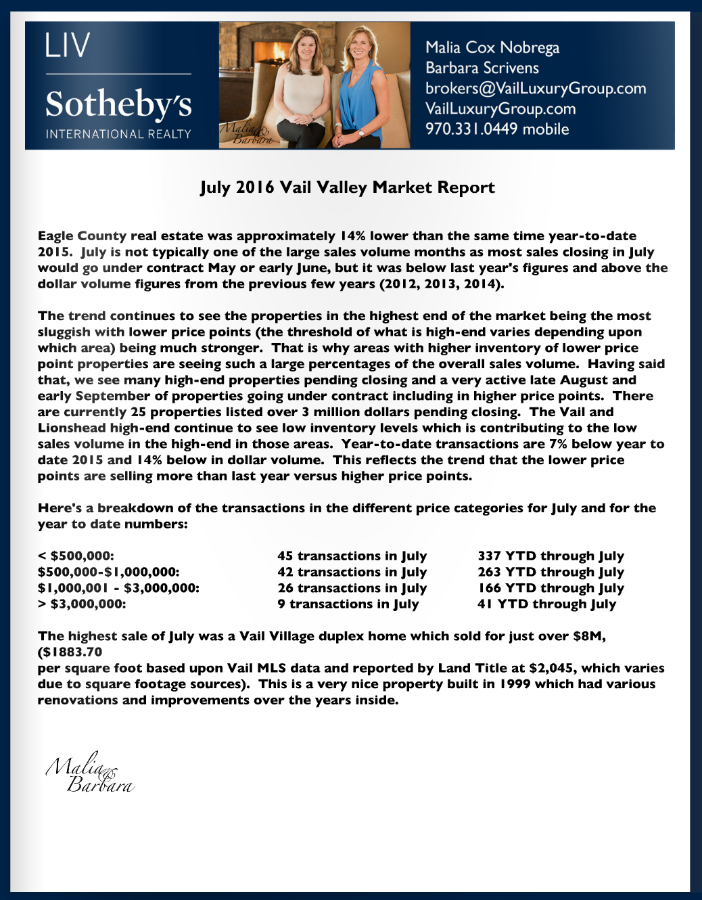 Eagle County real estate was approximately 14% lower than the same time year-to-date 2015. July is not typically one of the large sales volume months as most sales closing in July would go under contract May or early June, but it was below last year’s figures and above the dollar volume figures from the previous few years (2012, 2013, 2014).

The trend continues to see the properties in the highest end of the market being the most sluggish with lower price points (the threshold of what is high-end varies depending upon which area) being much stronger. That is why areas with higher inventory of lower price point properties are seeing such a large percentages of the overall sales volume. Having said that, we see many high-end properties pending closing and a very active late August and early September of properties going under contract including in higher price points. There are currently 25 properties listed over 3 million dollars pending closing. The Vail and Lionshead high-end continue to see low inventory levels which is contributing to the low sales volume in the high-end in those areas. Year-to-date transactions are 7% below year to date 2015 and 14% below in dollar volume. This reflects the trend that the lower price points are selling more than last year versus higher price points.

Here’s a breakdown of the transactions in the different price categories for July and for the year to date numbers:

The highest sale of July was a Vail Village duplex home which sold for just over $8M, ($1883.70
per square foot based upon Vail MLS data and reported by Land Title at $2,045, which varies due to square footage sources). This is a very nice property built in 1999 which had various renovations and improvements over the years inside. Click Here for the full report.